I created the graphic below for posting on Facebook. I was disappointed that it didn’t seem to get much attention. Perhaps it isn’t as clever as I thought it was, but I still think it deserves more exposure. Therefore, I am making this post on my blog.

The text in the graphic, of course, has a double meaning. Obviously, the Republican Party is, in general, the party that opposes the Democratic Party (the “Democrat” Party to GOP partisans these days). Being aligned against the Democrats, it is anti-Democratic.

Increasingly, the party that likes to think of itself as the “party of Lincoln,” is a party that seeks power at all costs to benefit the wealthy and well-connected. (Lincoln would not be pleased.) The GOP is the party of gerrymandering, voter suppression, and, in the aftermath of the 2020 election, the party of outrageous claims and frivolous lawsuits. It may be the party of even more outrageous attempts to steal the election from Joe Biden and Kamala Harris. In that sense, the Republican Party is deeply anti-democratic. It cares about obtaining and wielding power and cares not a fig about the abstract idea that is democracy.

Feel free to copy this graphic for use elsewhere. 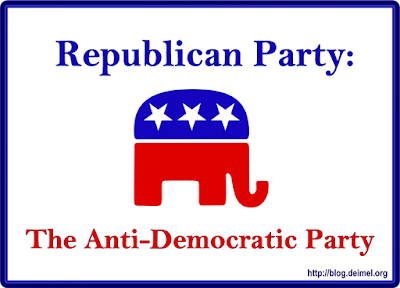