Celebrations and lamentations continue to appear in the wake of the defeat of the Anglican Covenant by Church of England diocesan synods. Covenant opponents have declared the compact dead, whereas supporters list the provinces that have already approved it, suggesting that the list will grow and insisting, improbably, that the Covenant can function meaningfully without participation by the Church of England.

Meanwhile, Prudence Dailey, of Yes to the Covenant, urged dioceses that had not yet voted to vote in favor of the Covenant to make a symbolic statement. Thursday, however, the Diocese of London, as did 23 dioceses before it, said no. Yesterday, the Diocese of Manchester did the same. It is difficult to see these votes as anything other than nails in the Covenant coffin.

Predictably, Archbishop of Canterbury Rowan Williams expressed disappointment and made the obvious observation that the disagreements that spawned the Covenant will not disappear with the rejection of it by his own church. Less credibly, he said


We shall still have to work at vehicles for consultation and manag­ing disagreement. And nothing should lessen the priority of sus­taining relationships, especially with some of those smaller and vulner­able Churches for whom strong international links are so crucial.

Others have expressed concern that the lack of a Covenant would alarm ecumenical partners or leave the Communion with no other alternative than adopting the Jerusalem Declaration.

In light of the rejection of the Covenant by the Church of England, it is perhaps time for Covenant supporters to reconsider the mission of an Anglican Communion unconstrained by restrictive agreements.

Anglican churches, I suggest, are joined in communion for mutual recognition of clergy, sacraments, and episcopal jurisdictions; for mutual aid, comfort, and fellowship; for joint pursuit of mission; and for consultation and conversation. Other projects are frankly impractical, problematic, or destructive.

Consider ecumenical discussions at the Communion level. These make little sense. The Archbishop of Canterbury has said that agreement on the Covenant is necessary for ecumenical partners to know who they are dealing with and what Anglicans believe. The reality is that Anglicans are not of one mind on myriad matters, and pretending that we are is disingenuous. This is the first lesson that “ecumenical partners” need to learn. The belief that significant ecumenical agreements can be made at the level of the Anglican Communion and bind the constituent churches of the Communion is a naïve and pointless exercise. The Episcopal Church can conclude a communion agreement with the Evangelical Lutheran Church in America; the Anglican Communion could never conclude a communion agreement with the Lutheran World Federation without groundwork provided by myriad bilateral agreements between individual churches.

Likewise, the Archbishop of Canterbury’s speaking for “the world’s third largest Christian body” or for “80 million Anglicans” is a fiction. The archbishop cannot meaningfully consult with or achieve consensus among all the Communion churches or their members before making a public statement. I suspect that many members of Rowan Williams’ own church would argue that he does not even speak credibly for the Church of England!  Similarly, Anglican bishops gathered at the Lambeth Conference speak only for themselves; they are not, in general, authorized to speak for their churches or to bind their churches to statements made by themselves and their episcopal colleagues. Similar arguments could be made about the Primates’ Meeting and the Anglican Consultative Council.

Finally, there is the matter of one church’s objecting to (or “raising a question” about) the actions of another church. There is no reason for a church to do this unless there is a worldwide Anglican “brand” to protect, or the actions of the foreign church are embarrassing to the objecting church because its own position is difficult to justify. The Covenant, of course, is all about establishing that worldwide Anglican “brand,” which then needs to be defended. In reality, Communion churches have different histories, different relationships to the Church of England, and exist in very different cultures. A homogenous Communion can be no more than a public relations illusion. The churches of the United States and Nigeria, for example, will resemble one another closely only centuries from now, if ever. In fact, the Church of Nigeria should be embarrassed by the progressive Episcopal Church, but not for the reasons usually advanced by the former.

Disagreements among Christians are as old as Christianity itself. The Anglican Communion has no need to “manage” them, only to acknowledge them and move on. “Smaller and vulnerable churches” have benefited from acknowledged Communion membership and from specific bilateral relations with larger and stronger Anglican churches. Signing a piece of paper will not make them larger and less vulnerable; nor will not signing make them smaller and more vulnerable.

Unfortunately, the Anglican Covenant has already created a two-tier Communion of those churches that have and those churches that never will adopt it. This is actually worse than having all Anglican Communion churches adopt the Covenant and, I submit, substantially worse than having no covenant at all. It is time to admit that the entire covenant project was a mistake. If the Communion becomes smaller thereby, it is a result that was probably inevitable, not the result of churches resisting an ill-conceived plan to replace Anglican diversity with a very un-Anglican uniformity 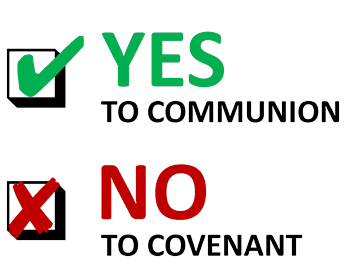