To Protect and to Serve

Watching the Minneapolis trial of Derek Chauvin, it is natural to ask what Chauvin’s defense can possibly be. The prosecution has offered witnesses to George Floyd’s life and his final day. Floyd was hardly a perfect human being, but he has at least been portrayed by witnesses as a sympathetic character. We have heard from his girlfriend. We have heard from bystanders appalled by the treatment he received at the hands of the Minneapolis police. We have been told that Chauvin’s behavior was unauthorized and uncalled-for. And, of course, we have seen the horrible videos.

Unless Chauvin’s defense team can pull an unexpected rabbit out of a hat, only three arguments appear available:

That we shouldn’t second-guess police actions is a conventional argument that is wearing thin in this age of Black Lives Matter. Too many unarmed black males are dying at the hands of police. The argument that the police must be given license to do anything they believe necessary in the line of duty simply won’t fly with the public these days, and I suspect it will be similarly unpersuasive to the jury. The defense will likely bring out this argument anyway, on the theory that it can’t hurt. (But it actually might.) 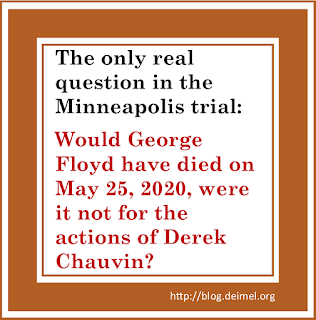 Blaming Floyd’s health and lifestyle is likewise a stretch. Yes, he was a drug user with a heart problem, but we learned last week that he worked out regularly and showed no evidence of being at death’s door in the videos from his last hour of life. Moreover, it is not hard to believe that one can die from being handcuffed on the ground with a knee on one’s neck for nine minutes. One’s general state of health is not likely to be particularly relevant in such a circumstance. Although EMS personnel and a cop tried to resuscitate Floyd, at least one of the first responders assumed that he was dead before he was loaded into the ambulance. It will be difficult for jurors to conclude that George Floyd’s death was not the direct result of the actions of Derek Chauvin. Nonetheless, expect the defense to blame the victim for his own demise.

The defense is probably going to offer the explanation police who kill most often trot out—that the defendant felt threatened and did what he—always he—had to do to protect himself. We are seeing the jury being prepared for this argument: George Floyd is big—and, implicitly, black and threatening—and Derek Chauvin is small and white. But the usual logic doesn’t work here. Floyd was immobilized on the ground and handcuffed. Anyone can see that he posed no credible threat to Chauvin or anyone else. Chauvin did not appear to be afraid of Floyd; instead, he seemed indifferent to his fate and in no hurry to conclude that enough force applied to the supposed miscreant was enough. But Chauvin or an attorney on his behalf will, no doubt argue that he felt threatened and did what he needed to do for his own safety.

Many police departments have adopted the slogan “to protect and to serve” (or “to serve and protect”). These infinitives indicate neither a subject nor an object. We are expected to infer that the police force exists to protect and serve civilians. Too often, however, the police protect and serve their own interests. When a cop is threatened or, more importantly, feels threatened, rightly or wrongly, the inclination is not to protect the public, perhaps even a perpetrator, but to protect him- or herself. This is a perfectly understandable impulse, but it is one that training should eradicate. Being threatened comes with the job. Police on the street need to recognize that and understand that even sacrificing their own safety or life may be necessary to protect those they are supposed to serve. Derek Chauvin cannot reasonably argue that he was protecting his prisoner or himself. In the various videos, he seems simply to be a self-satisfied sadist, and, one suspects, a racist.

Police unions nearly always defend their members, irrespective of how outrageous their behavior may have been. It is gratifying that, in the Chauvin trial, police officials are actually testifying against a police defendant. We can hope that this is the start of a trend. Nonetheless, it is hard to get twelve Americans to agree on much of anything these days, and the verdict of the jury is very much in doubt.

Pray for justice for George Floyd.