When his mother and my former wife, Betty Deimel, died, my son, Geoffrey August Deimel, wrote a tribute to his mother on Facebook the next day. With permission and minor editing, I have reproduced his essay below. My own tribute to Betty can be found here.

Many of you—particularly those who knew me in my Pittsburgh or Annapolis days—knew my mother, Betty Deimel. After battling an infection (not COVID) for the last several weeks, she succumbed to her illness late last night [May 21], dying in a hospital here in the Finger Lakes.

Her last few years were difficult. She had been quite sick for a very long time with a complex of conditions that became progressively more debilitating ever since she suffered an embolism in 2006.  I don’t think she ever felt truly herself again after that incident.

As much as my final years with her made an impression—and left their scars—I can already tell that they will fade. Instead, I will remember her as the mother I knew when I was growing up. The one who was so dynamic and hopeful.  The activist and rabble-rouser.  The social justice warrior. The political operator who organized for the ERA and marched with Dr. King. My mom gave me my confidence, my politics, and many of my ways of engaging with the world. She was a great parent, always doting and loving. She always had time for me despite a hectic career and dealing with her own considerable difficulties.

The picture below is from a book on the Women’s Movement.  There’s my mom on the right side.  And that’s my little head, in the snuggly on her chest. That’s the mom I’ll remember, the one I’ll forever miss. 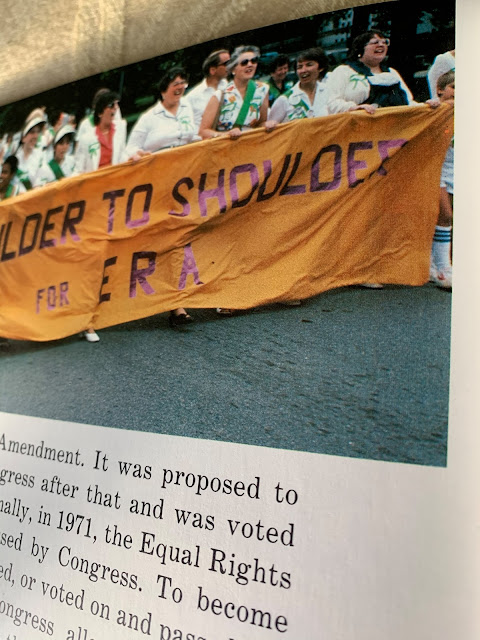