A New Name for the Redskins

So the Washington Redskins are finally to get a new name. Fine. What is it to be? I have been unimpressed by most of the names I have heard suggested. Redtails? That seems like a cynical attempt to embrace one minority after defaming a different minority for decades. Will the new uniform pants have scarlet seats?
An obvious naming strategy would be to take advantage of some aspect of the District of Columbia. After all, there once was a baseball team called the Washington Senators in town. This could be the new name for the NFL team. The team could adopt another name suggesting the governmental nature of Washington. We could cheer the Washington Lobbyists, the Washington Legislators, the Washington Lawmakers, the Washington Politicians (commonly called the Pols), or the Washington Solons. Less favorable references to our nation’s capital suggest names such as the Washington Swamp Rats or other names that, out of delicacy, I will not mention. 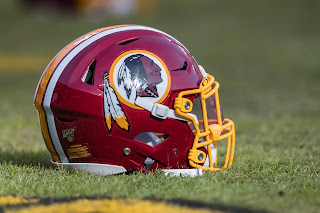 Many of those names probably would not work well, particularly those having more than two syllables. Actually, I sort of like Swamp Rats, though I doubt that has much chance of being selected. It does have but two syllables, which is a plus. (Go Rats!)
How about the Washington Leaders? If the team is actually any good, that name would have a double meaning. Again, the name has but two syllables.
My best suggestion is simply to call the football team the Washington Reds. Fans of the old name will see a surreptitious reference to the former name; detractors of the old name will see a name with no negative implications or, perhaps, will imagine a team of revolutionaries (or maybe Bolsheviks). The communist reference is a stretch. The name can just suggest a color. After all, my alma mater, the University of Chicago, fields the Maroons. What, after all, is a Maroon?
Well, I await a final decision about the team name from the Redskins front office. Is anyone ready to wager on what name will be selected?