A First Reaction to Dobbs

I am extremely upset by the Supreme Court’s having overturned Roe v. Wade yesterday in Dobbs v. Jackson Women’s Health Organization. I need time to read the opinion—opinions, actually—carefully and spend time developing a response that goes beyond fear and outrage. For now, I can only offer a few off-the-cuff observations with the promise of a future more thoughtful response.

What was published by the court lacks a table of contents, and the fact that the file is 213 pages long makes it difficult to find individual items within it. For the benefit of any reader who wants to navigate to particular sections, I offer a high-level table of contents below. Note that the page numbers refer to the pages in the PDF file, as sections are individually numbered beginning at 1.

The Dobbs decision was not unexpected, given the leaked draft opinion from Justice Alito. The appearance of the actual decision was nevertheless more shocking than I was prepared for. Most upsetting was the explicit suggestion by Justice Thomas that the court may not be done with extinguishing established rights. The court has sent decisions about abortion law back to the states. Will the same be done by this court for sodomy law, contraception law, miscegenation law, and sex-neutral marriage law? (Will Thomas ultimately have to divorce his white wife?) Buckle your seatbelt!

The trajectory of this court is frightening. We must do something to interrupt its retrogressive program. I’m not sure what that something might be, but Democrats need to figure it out. I hope that enough American voters will pass up voting for Republicans and instead elect more Democrats.

Many have observed that Roe was not a strongly argued opinion. Even Justice Ruth Bader Ginsburg was uncomfortable with it. The current court apparently took that opinion at face value and had no interest in finding a firmer constitutional basis for a right to abortion. My suspicion is that the justices had an agenda of killing Roe, and no reasoning, logical or legal, really mattered. After all, Donald Trump promised to put justices on the court who would overturn Roe. He fulfilled that promise three times.

I believe that the Supreme Court has made women permanent second-class citizens. Rather than writing more about this, I refer readers to a post I wrote back in May, A Comprehensive Examination of the Abortion Question. Perhaps in better times, my arguments will be availing.

For now, I have just one more observation. In the future—I hope not the exceedingly far future—Dobbs will be forever linked to Dred Scott v. Sandford and other disastrous Supreme Court decisions. 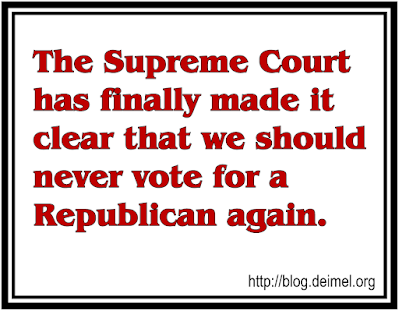