I have long been ambivalent about giving statehood to the District of Columbia. Clearly, the District is “different” from the existing 50 states, but the same sort of argument was made against statehood for Alaska and Hawaii. Whereas the last two states added to the Union were non-contiguous with the rest of the country, D.C. is special in other ways. Article I, Section 8, of the Constitution grants Congress the power to legislate for a district carved out from other states to be the seat of the government, a parcel “not exceeding ten Miles square.” (The actual area of the District of Columbia is just over 68 square miles, well under the 100 square mile stipulation of the Constitution.)

Residents of the District cannot vote for president and vice president, and they have neither senators nor voting representatives in the House. Yet, there are more than700,000 such souls, and they have long called for their being fully-enabled citizens of these United States. The population of the District exceeds that of Wyoming and Vermont. At this moment, when the country seems to be realizing that black lives do indeed matter, statehood has become especially pressing, as more than 45% of the residents of Washington are black. The Republican-led Senate will surely oppose statehood for the federal district, but a Democratic Senate, House, and White House, come 2021, almost certainly will enact it.

In fact, the House of Representatives passed a statehood bill, H.R. 51, on June 19. It would maintain a federal district mandated by the Constitution consisting only of federal buildings and monuments. The rest of the present District of Columbia would become Washington, Douglas Commonwealth, named for Frederick Douglass, the long-dead abolitionist whom Donald Trump opined has “done an amazing job and is getting recognized more and more.” (Douglas spent the last 17 years of his life, which ended in 1895, in Washington.) It is unclear how we will speak of the federal government should the District be given statehood. “Washington” will refer to the current District of Columbia less government property.  Will be speak instead of “D.C”? “Columbia” refers, of course, to Columbus, whose star has lost its luster of late, so I don’t know how long “District of Columbia” is viable in a woke U.S. Time will tell.

The proposed name is a bit odd, of course, but needs to be distinguished from the other Washington on the Pacific coast. The proposed state would not be alone in having a long name. Rhode Island is technically the State of Rhode Island and Providence Plantations, a name legislators are newly attempting to shorten. Whereas “the State of Rhode Island and Providence Plantations” can easily and unambiguously become “Rhode Island,” Washington, Douglas Commonwealth, cannot so simply be abbreviated without ambiguity. However, we speak of “Washington” all the time, and context indicates which Washington is intended. “Washington, Douglas Commonwealth,” allows “Washington, D.C.,” to continue to be proper nomenclature, albeit not, technically, for the seat of government of the United States. Were that not an advantage of the House proposal, perhaps East Washington could have been the name of the new state, analogous to the names of the Carolinas and Dakotas.

Republicans, of course, are unconcerned with democracy or the proper treatment of downtrodden minorities. They are only concerned with the fact that Washington, D.C., is largely Democratic and that statehood will likely add two Democratic senators and a Democratic representative to Congress. Given that other features of the Constitution that help Republicans by giving unrepresentative power to rural domains are unlikely to be changed any time soon, the addition of Washington, Douglas Commonwealth, will go a little way toward making Congress and the White House more truly representative.

I have worried about the state of our flag should another state be added to the Union. Admittedly, although 48 stars seemed perfect, the 49-star flag is acceptable. Perhaps it is even improved aesthetically by being a little less regimented. I really had not considered how to fit 51 stars onto the flag, but others have. Here is the most promising design, one most in keeping with recent versions of the U.S. flag: 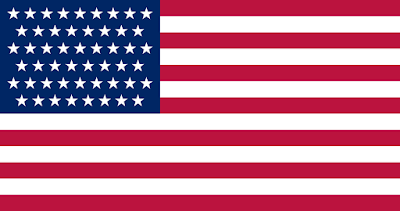 The above design is courtesy of the Flag Institute. It looks pretty good, no?