Let me begin by saying that, despite deploying the trap again today, I did not capture Schroeder.

A neighbor reminded me that I had a list of e-mail addresses of people in the neighborhood. Hoping that someone knew something about the orange tabby I caught in the trap yesterday, I sent a message to all my neighbors. It didn’t take long to get a message back that an orange tabby had escaped his home and was missing. It seemed unlikely that there were two orange tabbies roaming about, but I was perplexed by having been told that the escaped cat was chipped. Nevertheless, I told my neighbor that the cat I had trapped was at a local shelter. The cat, Ozymandias (Ozzie for short), a neutered male, was retrieved from the shelter this afternoon. As it happens, the cat was inherited from a relative who said the cat was chipped, but that may have been a misrepresentation. (Ozymandias is a name I had never heard before. I doubt that many cats are given this name.)

Anyway, the orange tabby adventure has ended happily. The trap will be set out tomorrow in the hope of capturing Schroeder.

As I mentioned yesterday, I forgot to take a picture of the cat I trapped. His owners have kindly provided a couple of pictures of Ozzie at home: 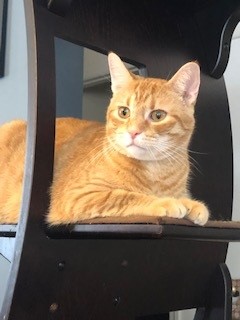 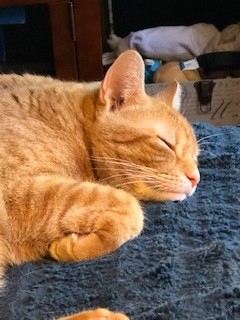