It was very cold today, and there was about 9 inches of snow on the ground. I noticed that there were prints in the snow leading to the small shelter I had put outside in the hope that Schroeder would find it and use it as a refuge from the cold. (There is a picture of the shelter in yesterday’s post.) I had not put the trap out today thinking that it might not work well in the snow.

In the early afternoon, I saw Schroeder leaning against the glass surrounding the back door. I quickly got a food bowl for him. When I opened the door, he clearly wanted to come inside. I put out the bowl, closed the door, and took a moment to think. The cat was clearly hungry, so perhaps I could induce him to enter the trap. I removed the food bowl and put out the trap, which had more food already inside. Schroeder walked around the trap, eying the food. Eventually, he entered the trap, but, to my surprise, he didn’t trigger the door that would have trapped him inside. (The trigger for the trap is a metal plate just in front of the bait.) I tried to close the trap door, but the cat came out. I decided to go inside and see what would happen next.

A few minutes later, I saw that Schroeder was inside the trap, and the door had been triggered. I had caught my intended quarry!

I brought the trap inside and was surprised that the cat was not struggling, though he did protest verbally a little. I set the trap down so I could call the shelter. The photo below shows Schroeder just after I brought him inside. Note the snow still clinging to the trap.

The next step was to take trap and cat to the animal shelter to check for a chip. The trip took 10 minutes or so, and I heard not a sound from Schroeder. It took a few minutes to check if the cat was chipped, as he really didn’t seem to want to move. We finally succeeded in checking. As I expected, there was no chip. Schroeder seemed to be on his own.

It isn’t clear what the step after neutering should be. Is this cat adoptable or will he need to be returned to the wild? The shelter did not have room for him, but I was sent home with Schroeder in a cage. On the way home, I was deciding where to put the new boarder. For safety’s sake, I wanted to keep him away from my own cats.

When I got home, I put Schroeder in a room I could close off (though Linus seemed to sense that something was up). It took a few tries before I constructed an adequate litter box and found bowls that took up as little room as possible in the modest cage (approximately 24x17 inches). I took the photo below once the cage was equipped with litter, food, and water. After the photo was taken, I replaced all three containers with smaller ones to give Schroeder as much room as possible. 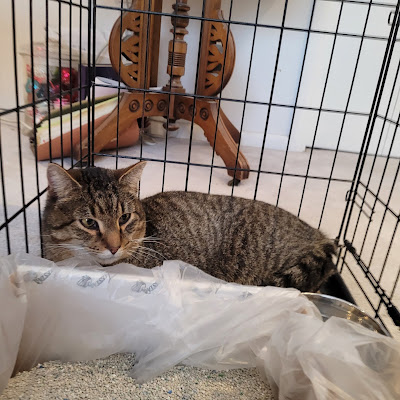 Schroeder has been very quiet and still. I have not tried to handle him at all. Tomorrow, we’ll see if we can be friends.