Bans Off Our Bodies Rally

People in hundreds of cities and towns were marching for abortion rights today. Indiana, Pennsylvania, is not a city large enough to rival the events in the likes of Chicago or Washington, D.C., but we had a respectable turnout.

I spent last night and this morning making signs for our local event. The products of my efforts can be seen below. 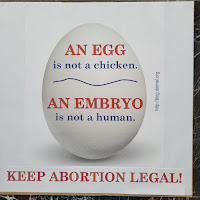 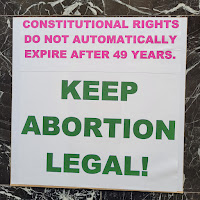 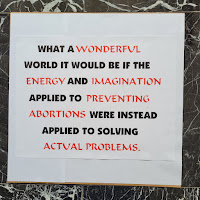 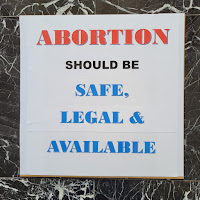 The march organizers supplied signs for the event, and others, as I did, brought their own.

The event began with speeches, though the speakers were basically preaching to the choirs about the need for women to make their own decisions about their bodies. The speeches ended with a plea to vote for Democrats in the upcoming elections, as Republican candidates are uniformly opposed to abortion.

Once the rhetorical part of the program was completed, everyone marched to the courthouse, crossed Philadelphia Street—see photo below—walked back on the other side of the street, and crossed the street again to return to IRMC Park, where we had begun. During our march, signs were visible to cars passing by. Unfortunately, Saturday afternoon did not see a lot of traffic on Philadelphia street, so it isn’t clear what effect our efforts had on Indiana public opinion. But it was satisfying to have participated in the demonstration and enjoyed the camaraderie of like-minded citizens.