Thoughts on Yet Another Gun Massacre

Yesterday’s school massacre in Uvalde, Texas, coming as it did on the heels of the supermarket massacre in Buffalo, New York, made me sadder and madder than I can ever remember being in response to a news story. Why do we countenance such obscenities,  reacting with only “thoughts and prayers”?

Of course, thoughts and prayers provide some small comfort. The presiding bishop of the Episcopal Church, Michael Curry offered a prayer from the Book of Common Prayer:

O God, whose beloved Son took children into his arms and blessed them: Give us grace to entrust these innocents to your never-failing care and love, and bring us all to your heavenly kingdom; through Jesus Christ our Lord, who lives and reigns with you and the Holy Spirit, one God, now and for ever. Amen.

President Biden, who knows well what it is like to lose a child, was unusually animated in his response. Speaking of the recurrence of mass shootings, he declared, “I am sick and tired of it.” (I could relate to that.) “Where, in God’s name, is our backbone?” he asked. “It’s time to act!”

Neither Bishop Curry nor President Biden nor I has much actual hope that this country will soon make changes that could turn back the rising tide of multiple assassinations of innocents. Americans long for such changes, but politicians refuse to deliver them. Politicians, primarily Republican politicians, will continue their steadfast inaction as long as voters are more interested in gasoline prices, low taxes, or high school trans girl athletes than in reining in the slaughter of our citizens.

Meanwhile, I fear that children will be afraid to go to school. Will they be reluctant to make friends for fear that their friends could be taken away from them in an instant? Need we send our children to school in body armor? Or will we conclude that public education is too dangerous?

Whereas I have no idea how we can create a safer America, I can certainly dream about how such a nation might look:

One could hope that, in the world I imagine here, most police officers would not need to carry a firearm.

The photograph below was posted on Facebook. It is of Makenna Elrod, a victim of yesterday’s shooting. How can you look at this child and not want to stop this firearm madness? 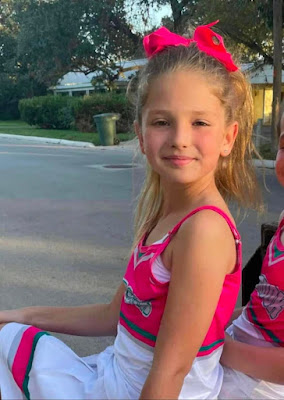