It used to be common for proponents of legal abortion to assert that the procedure should be “safe, legal, and rare.” The word “rare” was meant to mollify and reassure abortion opponents. The thinking was that abortions could be reduced in number through conscientiously implemented measures such as education and readily available, inexpensive contraception. Abortion opponents, the misnamed “pro-life” crowd, took “rare” to suggest something quite different. To them, making abortions rare was a license to suppress abortions through coercive legislation and misinformation. They have been very good and exceedingly imaginative at that.

The slogan “safe, legal, and rare, has a nice ring to it, and it seems a shame to have to jettison it. On Facebook, I offered the formulation “safe, legal, and common.” Although some liked the replacement of “rare” with its opposite, many were justifiably uncomfortable with the suggestion that we should be increasing the prevalence of abortion as a positive good. Despite what the anti-abortion activists may think, no one sees abortions in the abstract as a good thing.

Even if abortions are safe, which they are, and legal, which they increasingly are not, safe and legal are irrelevant if abortions are not easily and economically obtainable. This led me to consider words to replace “rare.” No single word seemed perfect or comprehensive in its meaning, but “accessible” seemed a pretty good choice. Incorporating this word into the graphic I originally posted on Facebook yielded the graphic shown below. People may use it as they see fit. 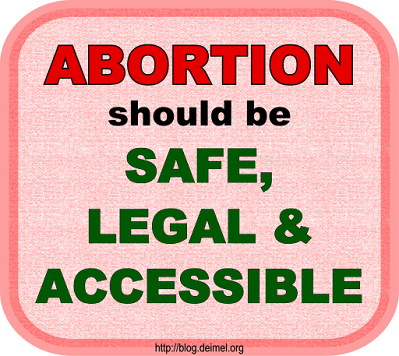