In Praise of Not Streaming

I am a Netflix subscriber. Unlike most subscribers, I not only stream material, but I also receive DVDs and Blu-ray disks. The option to get physical disks costs more, but, for me, it’s worth it. It allows access to classic—i.e., old—movies, as well as relatively new movies that are not yet available on streaming services (or on streaming services to which I subscribe, at any rate). The two most recent movies I’ve received through the mail are Alfred Hitchcock’s The Lady Vanishes (a classic film) and News of the World (a 2020 film). 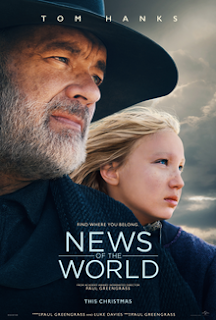 An additional benefit of watching movies on disk is that most disks contain “extras,” videos about the movie or the people who made it, deleted scenes, and commentary on the movie by directors, actors, or academics. If a movie is any good to begin with, the extras tend to enhance one’s enjoyment by providing perspective or insight.

The running commentary on News of the World by its director, Paul Greengrass, got me thinking about how supplementary material for a video disk is assembled. First, let me say that News of the World is indeed a fine movie, and principals Tom Hanks and 12-year old German actress Helena Zengel are superb in their respective roles. (I want to adopt Zengel.

Disk extras fall into two basic categories: historical and technical information about the movie, on one hand, and analysis of the movie itself, on the other. On too many disks, all the extras are of the first kind. These disks emphasize the mechanics of movie-making. That’s very interesting, and I have learned much about the craft of cinema from movies I have viewed on disks. What I miss on such disks, however, is insight into the actual product, something we might identify as literary criticism. It is frustrating when the supplementary videos on a disk concentrate on movie-making mechanics and the running commentary does the same.

The Paul Greengrass commentary on News of the World is a welcome outlier. Although he points out scenes that were difficult to film, most of what he says addresses the story itself. He talks occasionally about the actors, but mostly, he talks about the characters. Who are these people in the film? Why do they act as they do? How do they change over the course of the film? How does the movie reflect its historical context? What are the subtle choices made by the director and related craft people that are likely to be missed in a casual viewing? What is the message of the movie, particularly for our time?

What became crystal clear from the exploration of the Blu-ray disk of News of the World is that technical and personnel information about the movie should be in supplemental videos. The running commentary on the movie, irrespective of who is providing it, should analyze the movie and increase the viewer’s enjoyment of it by providing a deeper understanding of what appears on the screen.

Those folks who assemble movie disks should take note.