I purchased a new cell phone recently. Happily, most of what lived on my old phone was ported seamlessly to the new one. The transition was not as smooth as one might like, however, and I am still re-entering passwords and configuring applications. I am nonetheless satisfied with the new phone and likely will be especially pleased when I begin taking pictures with the new and improved camera that is part of it.
In many ways, I am risk-averse. In particular, I cannot imagine carrying around an expensive cellphone without a protective case or putting a naked phone, as some people do, in my back pocket. My old phone was protected by an OtterBox Defender case, which comes with a holster that can attach to your belt. I wanted to get another Defender case for the new phone. It is a very secure case.
My old phone was put into its Defender case by the person who sold me the phone.  I did not carefully observe the process, which, after all, was performed years ago. Where I purchased the new phone, there were few cases to buy for Android phones but plenty cases for iPhones. I therefore had to buy my new case on the Web and fit my phone into it myself.
Once I had my new case in hand, I assumed that putting my phone into it would be simple. There seemed to be only two parts—the case proper and the holster. The case came with the following (and only the following) instructions: 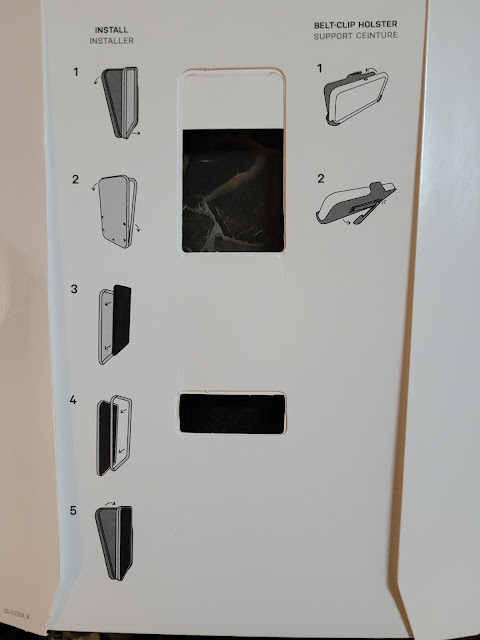 That was it, The only words of instruction were found at the top of the above card. None of the objects portrayed on the card were labeled. In particular, I couldn’t figure out what object was supposed to be the cellphone. I suspected from the pictures that the case came apart, but I feared that trying to pry it apart might break something.
After what seemed like an eternity of frustration, I turned to the World Wide Web. Sure enough, YouTube had more than one instructional video showing how to install a phone inside a Defender case. The videos gave me the confidence to break open the case, insert the phone, and put it all back together.
I have to say that OtterBox makes a fantastic case. But could they please spare a few English words to tell their customers how to use their product?