From time to time, a cat will show up under my bird feeders. I’ve seen a calico a couple of times, and a black cat came by once. For the past few weeks, I have had a more frequent visitor, a male tabby. Whereas other cats have run away as soon as I opened the back door, this one didn’t. I threw some cat treats on the ground in his direction, and he eagerly found and ate them. Since then, whenever my visitor has shown up, I have put out a bowl of dry cat food for him.

The photo below is from September 28. The bowl rests on a stepping stone just outside the back door. 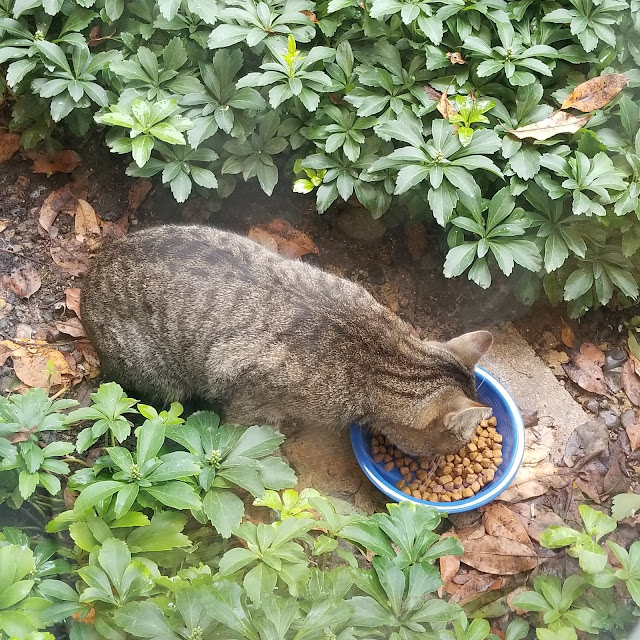 This cat has come by at irregular intervals, occasionally on successive days, though not usually. During an extended absence, I wondered if I would see him again, but he has continued to show up.
Our encounters have been somewhat fortuitous. I have not stood by the door all day looking for the cat, though I have taken to looking out the door more regularly than usual. The cat typically shows up not on my doorstep but in a little clearing about a dozen feet away. He has come to me when called. Occasionally, I have been alerted to his presence by my own cats staring out the glass in the door.
When I first called the cat, I just said “hello.” It seemed to make more sense to call the cat by his name, however. Since it was unknown whether anyone had given him a name, I decided that I had to invent one. My cats, Charlie and Linus, are named after Peanuts characters, so I decided to call my visitor by another Peanuts name, Schroeder.
Schroeder is an intact male, so I doubt that he is someone’s pet, but I have arranged to have him checked for a chip if I can catch him. I am not much of a cat catcher—read about my latest adventures getting my own cats to the vet here and here—but the behavior of Schroeder has given me hope that I might be able to entice him into a carrier. He has actually tried to walk through the doorway, though I have not let him come into the house. I have been able to touch Schroeder, but he has not acted like a socialized animal. I want to have him neutered and released if he is not a candidate for adoption. As you can see below, he looks like a young version of Charlie.
Schroeder came by yesterday, and I put out a bowl of food for him as usual. Charlie and Linus were nearby and took an intense interest in the visitor. In the photo below, Charlie is standing on his hind legs trying to get a good look at Schroeder, who is eating just outside the door. Linus is also watching Schroeder from his usual lower perch on the cat tree. 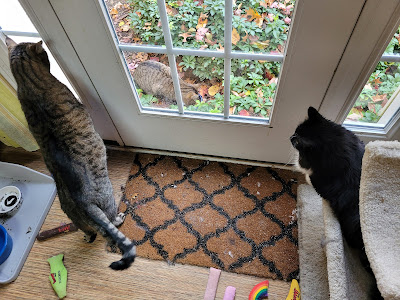 I will keep everyone posted on future interactions with my occasional feline visitor.