The Message of the Parable of the Good Samaritan

I have never been completely satisfied with the text of the parable of the good samaritan. Luke 10:25–37 reads as follows in the New Revised Standard Version:

But wanting to justify himself, he asked Jesus, “And who is my neighbor?” Jesus replied, “A man was going down from Jerusalem to Jericho, and fell into the hands of robbers, who stripped him, beat him, and went away, leaving him half dead. Now by chance a priest was going down that road; and when he saw him, he passed by on the other side. So likewise a Levite, when he came to the place and saw him, passed by on the other side. But a Samaritan while traveling came near him; and when he saw him, he was moved with pity. He went to him and bandaged his wounds, having poured oil and wine on them. Then he put him on his own animal, brought him to an inn, and took care of him. The next day he took out two denarii, gave them to the innkeeper, and said, ‘Take care of him; and when I come back, I will repay you whatever more you spend.’ Which of these three, do you think, was a neighbor to the man who fell into the hands of the robbers?” He said, “The one who showed him mercy.” Jesus said to him, “Go and do likewise.” 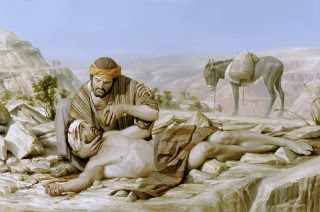 A minor complaint is that this text has far too many pronouns and too few nouns. That said, it is not difficult to figure out the referents of the various “he”s and “him”s of the text.

Likewise, the lesson of the parable is clear: We are to treat our neighbors as we ourselves want to be treated, and our neighbors are not only those with whom we are familiar, but everyone. All the characters in the story are Jews except the Samaritan. Samaritans were foreigners not on the best of terms with Jews. The surprise of the story is that the Jews did not help a fellow Jew in distress, but a Samaritan did.

My problem with this story concerns the question Jesus is supposed to have asked. We cannot know what he did ask, of course, for the author of The Gospel According to Luke was assuredly not around to have heard the question.

In the story, Jesus asks who “was a neighbor” to the robbery victim. To make the obvious point of the parable, however, Jesus should have asked something to the effect of “who understood the robbery victim to be his neighbor?” The victim is in no condition to be neighborly to anyone and, in this story, is not asked to be. Of the three passersby, only the Samaritan saw the injured man as his neighbor, thereby providing an example of how we should treat our fellow human beings whatever their station. Since the “neighborly relation” is not intrinsically symmetric, Jesus’s question should properly identify who is the active person in the relationship he is seeking to elucidate.

It is unfortunate that the parable has come down to us as it has. Preachers should explain that Jesus probably did not ask the precise question he is reported to have asked.